On March 27, 2018, over 40 participants attended the excursion to the Port of Rotterdam, organised by Corps Consulaire Noord-Brabant CC-NB. Members of Corps Consulaire Nederland CCN were invited to join in and 19 of them seized the opportunity, together with CC-NB members and their guests (among them the Ambassadors of Hungary and of Lithuania, embassy staff members and other special guests).

While a previous visit to the Port of Rotterdam organised by CCN in 2012 especially focussed on the Maasvlakte, this time the destination was the Port’s Headquarters. In the ‘Galaxy Room’ on the 31st floor, far reaching vistas were revealed to us. 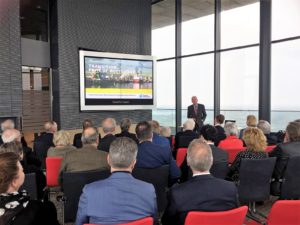 In keeping with the Paris Climate Treaty, the Port of Rotterdam has made rigorous choices in order to be carbon neutral in the year 2050. A courageous decision with wide ranging consequences, and with a distinctly autonomous signature. Rotterdam chooses to follow its own ambitious course, to be a forerunner and not a follower, without isolating itself from developments elsewhere on the globe.

The compelling lectures by Mr. Victor Schoenmakers (honorary consul of the Republic of Seychelles, Director Corporate Strategy Port of Rotterdam and a member both of CC-NB and CCN) and by Mr. Frans van Keulen (Chief External Relations Officer Port of Rotterdam) explaining the consequences of the choices made and the trajectories designated to achieve the goals, have made a profound impression and underlined the sense of urgency that was shared by most participants.
Descending from the Galaxy Room to sea level again, the Port of Rotterdam had prepared us a comfortable yet direct confrontation with the situation ‘as is’, and we were invited to board the magnificent mv Nieuwe Maze for a tour of the port, while enjoying a well catered aperitif. 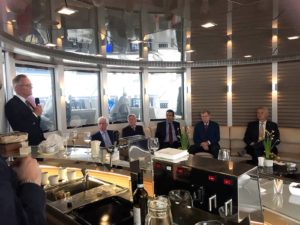 Thanking the Port of Rotterdam, on board MS De Nieuwe Maze

On behalf of CC-NB and all participants, we thanked our hosts for a great event, and as a token of our gratitude Mr Schoenmakers, Mr Van Keulen and their assistant Mrs Moolenaar – vital to the success of the afternoon – received a small present from Noord-Brabant: an original Bossche Koek. Which they liked very much, or so they said.